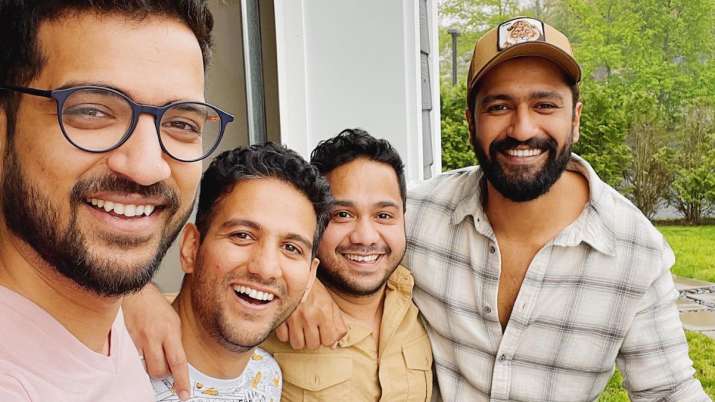 Lovebirds Vicky Kaushal and Katrina Kaif are currently enjoying their vacation in New York. The couple is also indulging themselves in other activities and making their vacation memorable. Katrina had tried her hand at bowling and shared a glimpse of her weekend while Vicky also made time to catch up with his friends from college. On Sunday, the ‘Masaan’ actor took to his Instagram handle and posted a photo with his college mates where he can be seen posing with them. Along with the post, he wrote, “Batch 2005”.

On the other hand, Katrina shared a glimpse of her epic bowling Saturday night. In the photo, she is clad in denims and is wearing a pink-and-white checked shirt and bowling shoes. Dropping the picture, she wrote, “A very American Saturday.” ALSO READ: Katrina Kaif, Vicky Kaushal visit Priyanka Chopra’s Sona restaurant in NY; latter gives sweet reply

A while ago, Vicky and Katrina went to Priyanka Chopra‘s New York restaurant named Sona and shared a photograph where they can be seen smiling and posing with a member of the restaurant, Maneesh K. Goyal. Alongside the pic, she wrote, the place felt like a home away from home. “Home away from home – @sonanewyork. Loved the vibe – @priyankachopra as always everything you do is amazing,” she wrote.

In response, Priyanka Chopra reposted Katrina’s Story and wrote, “Love u honey! So glad u guys could make it. @sonanewyork welcomes u anytime..#homeawayfromhome.”

On the work front, both Vicky and Katrina have an interesting lineup of movies for the upcoming year. The Uri actor will star in ‘Govinda Nam Mera’ with Bhumi Pedneker and Kiara Advani. He also owns an untitled movie of Laxman Utekar starring Sara Ali Khan. Vicky will appear in ‘Sam Bahadur’ of Meghna Gulzar. ALSO READ: Katrina Kaif spends romantic time with Vicky Kaushal at her favourite place Bubby’s | See PICS

On the other hand, Katrina Kaif has ‘Tiger 3’ in the pipeline, starring Salman Khan. She also has a horror-comedy ‘PhoneBhoot’ starring Siddhant Chaturvedi and Ishaan Khatter. She will also share screen space with Priyanka Chopra and Alia Bhatt in Farhan Akhtar’s ‘Jee Le Zaraa.’