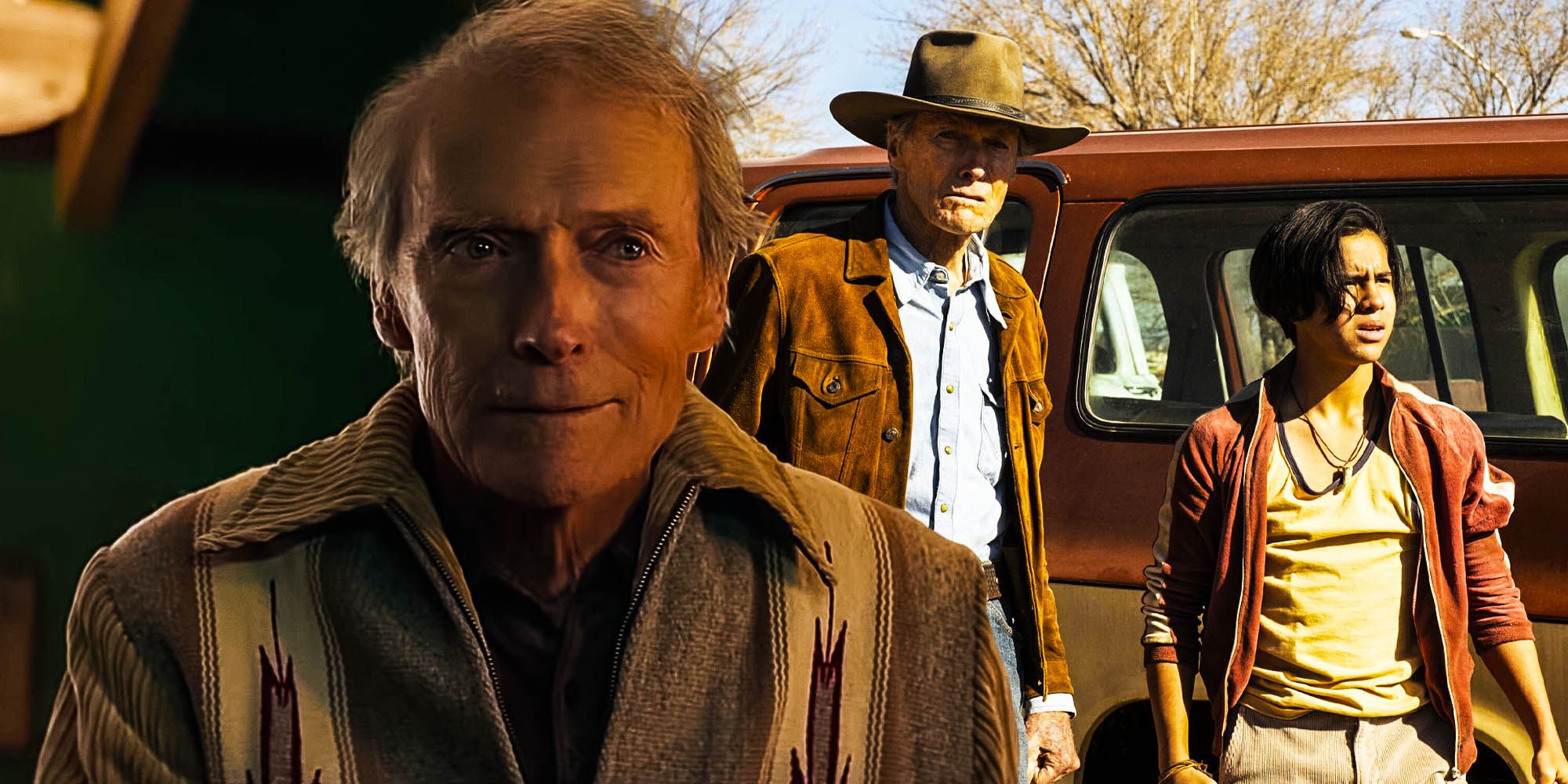 Cry Macho‘s ending cements it as a very different journey for Clint Eastwood. After 2018’s The Mule, Cry Macho just became the latest in many movies to feature Eastwood as the director and the star. The critically acclaimed director and actor returned to his Western roots for a story about an elderly cowboy and a wild youngster in Mexico.

The Western genre is what made him a cinematic icon in the first place, with Sergio Leone’s The Dollars Trilogy and a slew of other well-known hits from that era. The last time he acted in and helmed a Western was 1992’s Unforgiven. Now, nearly 30 years later, Eastwood proves that he can still headline a Western movie, even though he was already playing aging cowboys in the 1980s and 1990s in films such as Unforgiven and Pale Rider. A movie that was almost included in that category was Cry Macho, but Eastwood passed on an opportunity to make the picture in 1988. As a result, other actors were cast in the part, but nothing ever resulted from the numerous attempts to bring the story to the big screen.

Related: What Cry Macho’s Opening Song Is (& What It Means)

Though it may have seemed like the ship had sailed on Eastwood starring in Cry Macho, a film adaptation of the 1975 novel finally became a reality. In the Western – which is set in 1979 – Eastwood’s Mike Milo had to go on a long trip across Mexico to get 13-year-old Rafo (Eduardo Minett) away from his abusive, party-loving mother and back to his rich father and ranch owner, Howard Polk (Dwight Yoakam). Naturally, many obstacles slowed them down, including car thieves, their second vehicle breaking down, and the hired henchman of Rafo’s mother. Here’s how things ended for Mike and Rafo, and how the conclusion reinforced the main idea behind the movie.

Why Rafo Decides to Live With His Father

Rafo’s story in Cry Macho involved a great deal of back-and-forth, as he changed his mind more than once about where he wanted to live. Long after deciding to accompany Mike back to his father’s ranch, Rafo faced his biggest dilemma in Cry Macho when Mike told him why Howard wanted him. Discovering that Howard intended to use him as leverage in his dealings with Leta (Fernanda Urrejola) understandably angered Rafo, who declared that he wouldn’t go with Mike. Mike tried and failed to convince him to go anyway, but Rafo didn’t relent until after the officers accosted them. Rafo ultimately put aside his rage, likely after having a few moments to process what he had learned.

Plus, Mike seems to have succeeded in convincing him that despite his father’s flaws, he is a good person at heart who truly does want his son back. Thinking Howard was being insincere is largely what held him back from going. Rafo knowing the truth about Howard but still being swayed by Clint Eastwood’s Mike into completing the trip to Texas speaks volumes about the bond that the two developed over the course of the movie. Rafo didn’t know much about his father, but he trusted Mike deeply.

Why Rafo Gives Macho The Rooster To Mike (& What It Means)

In a surprising move, Rafo gave Macho the rooster to Clint Eastwood’s Mike during their final meeting at the border. Rafo giving him up despite the strong attachment he had to the rooster was a moment filled with meaning. His reasons for parting ways with Macho can be attributed to the movie’s underlying theme, which relates to masculinity. It was explained during the campfire scene that Rafo named his rooster “Macho” because of how strong and brave he is, which is exactly how Rafo sees himself. Throughout the film, it was made clear that the rooster represented Rafo’s ideas about the importance of a man being strong and “macho.”

Related: What Clint Eastwood’s Next Movie Should Be (After Cry Macho)

In contrast, Mike believed that these beliefs were outdated and misguided. Mike had one last talk with Rafo about this in the car, where he said that being macho is “overrated.” According to Mike, showing off strength and grit doesn’t really get people anywhere. To illustrate this point, he used the example of a cowboy getting stomped on by a bull and getting thrown by a horse. So Rafo handing the rooster over to Mike symbolized the character’s maturity, and his acceptance that Mike was right about his “macho” viewpoints. It means that Rafo will be on a better, less reckless path going forward.

Cry Macho doesn’t reveal if everything worked out for Rafo at Howard’s ranch, but it does tease Mike’s future after the film’s events. At the end of Cry Macho, during its finale scene, the character is seen slow-dancing with Marta (Natalia Traven), who shared a brief romance with when they were staying in the village. This explains why Mike remained in Mexico when he met Howard at the border instead of returning to the States. Not unlike Rafo, Mike enjoyed the quiet life they experienced in the village with Marta and her grandchildren. Mike’s decision to return there suggests that he basically took his own advice. When talking to Rafo in the car, he said that people don’t realize until they’re older that they don’t have all the answers when it comes to what’s best for them in life, and sometimes they don’t reach that realization until it’s too late. It seems that Clint Eastwood’s Mike figured out that what he wanted was to settle down in the Mexican village with Marta.

What happens to Eastwood’s Mike Milo at the end of Cry Macho isn’t all that unexpected in the context of the movie, but it’s worth noting that it does stand out when compared to other entries in the Western genre led by Eastwood. Clint Eastwood Westerns typically follow a common trend in which the main character is a strong and capable drifter who tends to represent all the beliefs held by Rafo in Cry Macho. Eastwood was a Hollywood “tough guy” who exemplified strength during those days. Eastwood’s characters are always strong, seemingly unbeatable gunslingers who can shoot faster than anyone else and outfight everyone who dares cross them. It was that way when The Man With No Name won his standoff with Lee Van Cliff’s Angel Eyes in The Good, the Bad, and the Ugly, and it was true for all of his other Western shootouts. That also extends to his later films, like Pale Rider and Unforgiven. In those movies, being old doesn’t stand in the way of Eastwood taking down the bad guys. So in a way, Cry Macho feels like an evolution of Eastwood’s career in the Western genre.

This was also reflected in the ending, which offered something fundamentally different for his character. As noted above, Eastwood’s characters are generally mysterious loners and drifters, and that’s not something that usually changes when the movie ends. After saving the day, Eastwood is usually seen riding away, ready to move on to the next adventure. It’s not often that he settles down for the sake of love. Cry Macho’s ending stands in stark contrast to movies like Pale Rider, which ended with Eastwood’s aging hero leaving his love interests behind for parts unknown. But this time around, the cowboy received a well-deserved, happy ending to his story.

Many wondered why Cry Macho was seemingly snubbed at the 2022 Oscars, winning zero awards, much less Best Picture – but while it’s a good Clint Eastwood movie, it’s not the best Clint Eastwood movie. It would’ve made history, rendering Clint Eastwood the oldest Oscar winner of all time. However, Cry Macho actually sits at 58% on Rotten Tomatoes. The movie has some clear issues. The biggest complaint from critics is that the film is uninteresting. The stop-start narrative set a major problem for the pacing of Cry Macho, and people weren’t all too forgiving of the one-dimensional dialogue. When going up against movies like Don’t Look Up or Dune, a film has to intrigue its viewers, and Cry Macho didn’t hit the mark.

Another issue with Cry Macho was the lack of subtext, with the rooster handoff probably being the only subtle, underpinning touch. This bled into the dialogue and made the formulaic nature of the movie painfully obvious. While Cry Macho attempts to subvert masculinity tropes in the Western, nothing is done in terms of subtext to relay this. The film relied too heavily on exposition to display the message. The final resounding complaint about the movie is that it’s too dated. While it was set in 1979, it also felt like a movie that was made in 1979, meaning that more urgent and relevant movies like King Richard and West Side Story beat it out. It’s not that Cry Macho was a bad movie. It was simply muscled out of the ring for Best Picture.

Next: Cry Macho: Why Clint Eastwood Replaced Arnold Schwarzenegger In The Lead

Nicholas Raymond is a staff movies & TV features writer for Screen Rant. He has a degree in journalism from the University of Montevallo, and is the author of the psychological thriller and time travel novel, “A Man Against the World.” Nicholas’ love for telling stories is inspired by his love for film noir, westerns, superhero movies, classic films, and ancient history. His favorite actors are Tyrone Power and Eleanor Parker. He can be reached by email at cnrmail@bellsouth.net and on Twitter at @cnraymond91.