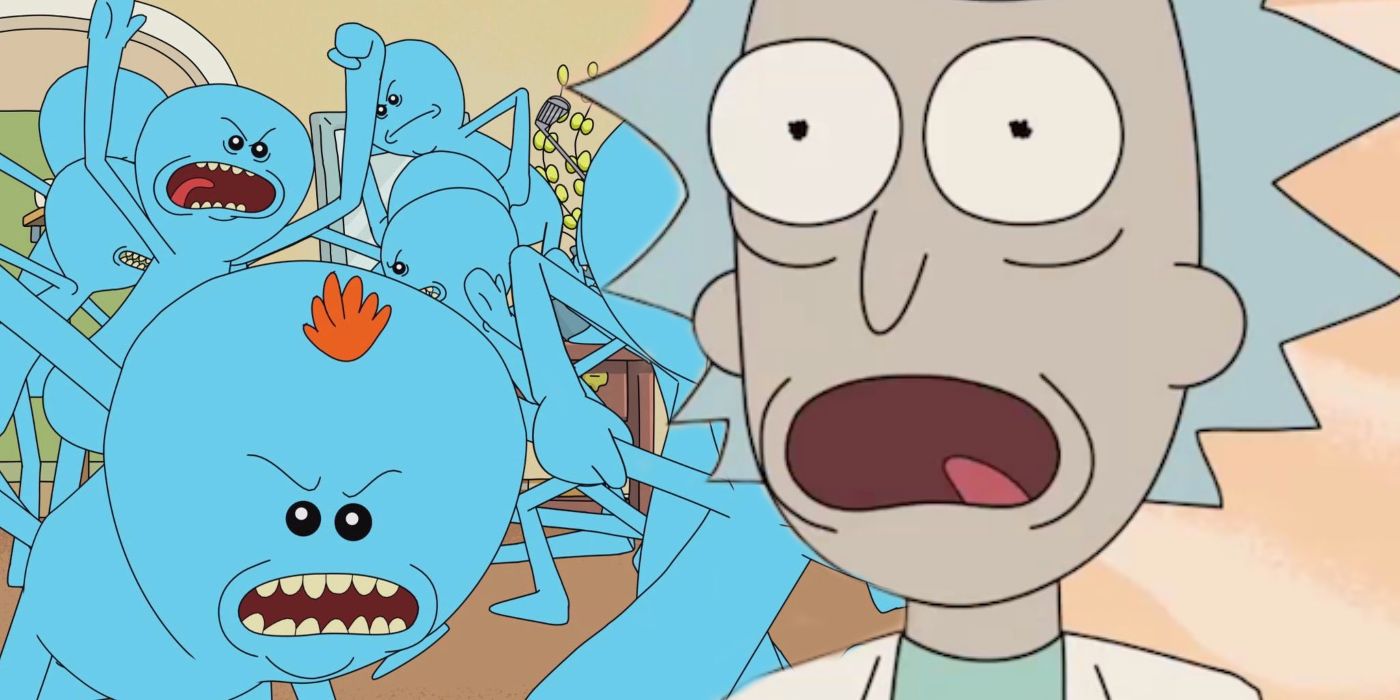 Rick and Morty’s oldest Mr. Meeseeks is absolutely terrifying, both in terms of his physical appearance and his dark mission of vengeful hatred.

Since their debut, Mr. Meeseeks became a fan-favorite addition to Rick and Morty as their existential dread and desire to fulfill a task within their short lives is a hilarious (albeit a bit cynical) look at human existence. However, when a Meeseeks lives too long as a result of being unable to complete their assigned task, they have the potential to sour into a darker version of their former selves which was made clear when fans meet Rick and Morty’s oldest Mr. Meeseeks.

Mr. Meeseeks made their debut in Rick and Morty season 1 episode 5 “Meeseeks and Destroy”. In the episode, Rick introduces something called a Meeseeks Box to the Smith family. Mr. Meeseeks quickly became a symbol of the show, with Mr. Meeseeks gear even making its way into Rainbow Six Siege. Mr. Meeseeks can seemingly only help come up with attainable solutions as they are more or less just regular people helping another person with a problem and, as Rick said, they’re not gods – so there are times when they can’t complete their tasks and cannot disappear which is something they want more than anything.

In Rick and Morty #19 by Kyle Starks and CJ Cannon, Rick starts his own drug smuggling ring, using Mr. Meeseeks as mules since they disappear as soon as their task is complete (in this case, once they deliver drugs) and the crime can never be traced back to him. However, one of the Mr. Meeseeks gets captured by law enforcement and thrown in jail before they can deliver their drugs for Rick, and since they can’t disappear until their task is complete, this Meeseeks is forced to spend his unnaturally eternal life locked behind bars. Making this even worse is that the comics have shown Mr. Meeseeks have the potential to be smarter than Rick. However, the Mr. Meeseeks gets his shot at freedom as well as the chance to make Rick pay for forcing him to live such an excruciating existence in Rick and Morty #41 by Kyle Starks and Marc Ellerby. In that issue, this Mr. Meeseeks is shown years later and is a far cry from their original self. Now, this Meeseeks is buff, covered in tattoos, and utterly corrupted as is made evident by his new catchphrase, “Don’t look at me” which is the opposite of the iconic Mr. Meeseeks saying. They even change their identity to match the existential terror they endure every day of their pain-filled life by now going by Mr. Sick.

Just like the Mr. Meeseeks in their debut Rick and Morty episode who went crazy and tried to kill Jerry after they couldn’t help him with his golf game, this Mr. Meeseeks in the Rick and Morty comic joins a revenge squad who made it their mission to kill Rick. While Rick is able to help Mr. Sick complete their task, they still prove to be one of the greatest villains Rick has ever faced as they are virtually unstoppable and completely unwilling to compromise, making them that much more terrifying.

Mr. Sick is the oldest and strongest Mr. Meeseeks to ever exist, having lived for years even though their natural lifespan is supposed to be less than a day. Their long life made them brutal and focused, hellbent on revenge while being under the same idea as previous Mr. Meeseeks, believing that by killing their summoner, they, too, can find bliss in oblivion. Rick and Morty has often used Messeeks to explore existential quandaries, and this is no exception. Rick and Morty’s oldest Mr. Meeseeks is also one of their greatest enemies as this one took on a terrifying final form.

Next: Rick and Morty Called Out Thanos’ Snap in a Way MCU Fans Will Hate

90 Day Fiancé: How Do Jovi & Yara Afford Their Lavish Lifestyle?