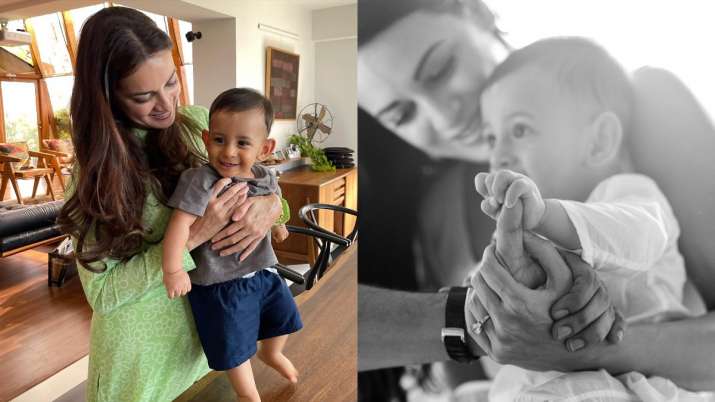 Dia Mirza on Saturday penned a heartfelt note as she celebrated her son Avyaan Azaad’s first birthday. The actress who welcomed the little one with her husband Vaibhav Rekhi also dropped a monochrome picture and shared how he had to undergo 2 life-saving surgeries after being born 3 months premature. Dia called him a ‘warrior’ and thanked the medical staff and the doctors who looked after Avyaan during his treatments.

She captioned the post as, “Our Jaan, our miracle, you were born on this day 1 year ago with the song ‘Imagine’ playing. You were 3 months premature at 820 gms. 36 hours after birth we discovered you had necrotising enterocolitis and had to go through life saving surgery. You were cared for and nourished in the NICU with a stoma for 90days and finally sent home to us with a stoma.”

“After you had gained strength and weight you went back to hospital for a 2nd surgery that lasted four and half hours. The doctors prepared us for the worst and said it would take a minimum of 21 days before you could be back home with us. Avyaan Azaad, you were ready to be home with us on day 9 our warrior.”

Dia added, “Your grace, your strength, your determination to fight the odds is so inspiring. Our son, you are now catching up on all your milestones, are happy, playful and loving. You fill our heart with joy and gratitude every single day. We are amazed and amused that your first spoken word is – Tiger.”

She concluded by paying thanks to the medical team of doctors and nurses, “We remain grateful to all of your doctors and nurses for taking such good care of you. Avyaan Azaad, you have inherited a world that will count on your love, grace, empathy and kindness. Make your own way our darling. Just as you do every day. Always remember – you are love.”

Dia and Vaibhav had tied the knot in February 2021 in an intimate wedding ceremony. The actress announced her pregnancy in April, last year.