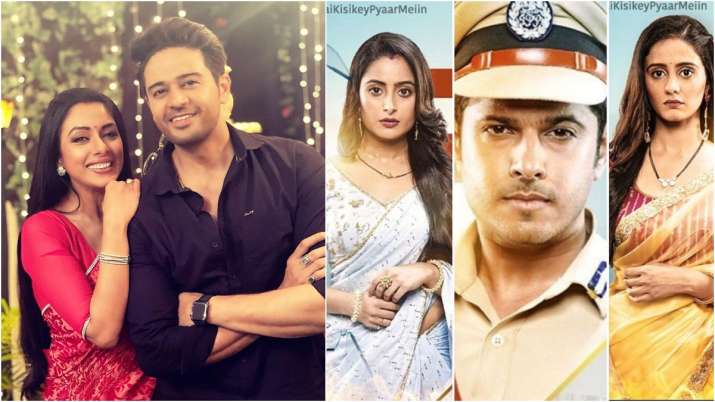 Hindi TV serials have been battling it out for viewership. Dramas have been ruling over the fans’ hearts and in the past week, the top five shows based on viewership have also been daily soaps. Let us take a look at the shows that have managed to find a permanent place in the hearts of the TV viewers based on the TRPs they have collected.

Rupali Ganguly, Sudhanshu Pandey and Gaurav Khanna starrer Anupamaa is the number 1 show based on TRPs of the 18th week. The show navigates the life and struggles of Anupamaa (Rupali Ganguly) as she fights with society to make a place for herself and other women like her. In the current episodes, Anupamaa is marrying Anuj Kapadia (Gaurav Khanna).

Love triangle storyline in Ghum Hai Kisikey Pyaar Meiin has maintained its grip over the telly audience and in the past week, the show has come in at the number 2 spot courtesy of its tremendous fan following.

Long-running daily soap Yeh Rishta Kya Kehalata Hai has come in at number 3 based on viewership data. The past few episodes have focused on the marriage of Akshara (Pranali Rathore) and Abhimanyu (Harshad Chopda). The entire wedding sequence has been shot on a lavish budget.

Star Plus show Imlie comes in at the number 4 spot based on TRP ratings. The daily soap is led by Sumbul Touqeer, whose character in the show is called Imlie. There is an interesting track going on in the show currently. Aryan’s ex-girlfriend Jyoti has entered the show and she is trying to prove Imlie wrong in the public eye.

Abrar Qazi and Sargun Kaur Luthra starrer Yeh Hai Chahatein is one of the top Star Plus show because of the interesting storyline. The twists and turns of the show have glued us to the screens.