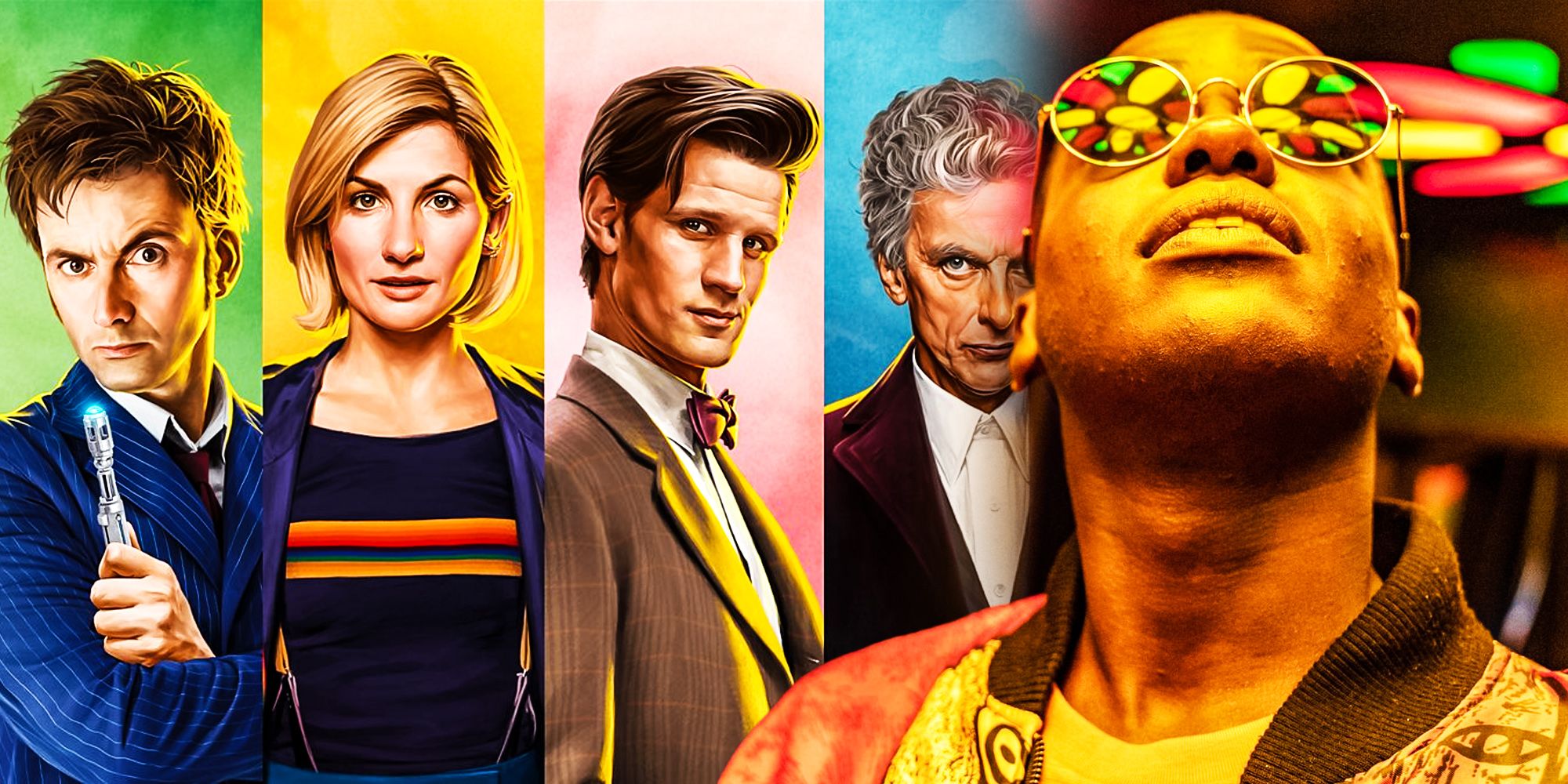 Doctor Who has remained a staple of British sci-fi TV for nearly 6 decades, and its rotating cast of charismatic Doctors provides it longevity – here are all 14 Doctors in chronological order. In a role made immortal by Tom Baker, David Tennant, Sean Pertwee, Matt Smith, and many others, Sex Education’s Ncuti Gatwa will play the 14th Doctor in Doctor Who. Starting as the new Doctor in 2022 after Jodie Whittaker’s 13th Doctor regenerates, Gatwa will be the first Black Doctor in the show’s extensive run.

Part of Doctor Who‘s appeal is that the titular Doctor is an alien Time Lord who regenerates with a new body, face, and fashion sense instead of dying. Including the various non-numerical versions like John Hurt’s War Doctor, Ncuti Gatwa is the 17th actor to be cast as one of the Doctor’s many regenerations. Each actor has a unique take on the character which defines the show while they’re in the role.

Related: Doctor Who: 5 Old Characters We Miss (& 5 That Should Probably Be Phased Out)

After his standout performance as Eric Effiong in Sex Education, there’s already speculation about what Gatwa will bring to the Doctor Who franchise. The show started running in the early 1960s and, despite a temporary break, it’s still going strong. Each version of the Doctor is different, but almost all of them got their opportunity to shine thanks to the actors who play the Doctor.

The First Doctor kickstarted the series all the way back in 1963. He was also one of the few regenerations of the Doctor that traveled with another Time Lord – or, in this case, a Time Lady – the Doctor’s granddaughter Susan.

William Hartnell played the First Doctor, and his no-nonsense personality and dry wit made him different from the regenerations that came after him. Plus, unlike other Doctors, this one even didn’t like humans all that much.

Nothing lasts forever, and Doctor Who is no exception. When William Hartnell had to leave the show because of health issues, the Doctor regenerated and changed into Patrick Throughton. Throughton’s Doctor also started the tradition of each Doctor having a different personality than the previous regenerations.

Related: Doctor Who: 5 Characters Who Have Grown A Lot (& 5 Who Haven’t)

The Second Doctor was much more relaxed and had a strong sense of humor. Unfortunately, most of his episodes are no longer available.

For the first time in color – the Third Doctor came on the big screens with a style! Jon Pertwee’s Doctor was not only stylish and elegant but also a good fighter and – just like the other regenerations – deeply intelligent.

Unlike his predecessors, this Doctor spent most of the time on Earth where he was exiled and he worked with the organization UNIT. He also clashed with the Master for the first time ever.

This regeneration of the Doctor remains one of the most famous ones, at least among those who watched the classic Doctor Who series as well, and not just the renewed show.

Related: Which Doctor Who Character Are You Based On Your Zodiac Sign?

Tom Baker played the Doctor for seven whole seasons which gave the audience enough time to get to know his Doctor well. It was also for the first time that the Doctor’s adventures aired in the USA.

Before Matt Smith came onto the show years later, Peter Davison was the youngest actor to play the Doctor. He started playing the Fifth Doctor when he was just 29 years old.

The Fifth Doctor was different from his previous regenerations, quieter, subdued and he preferred thinking things through over headlessly throwing himself into danger. He was also the first Doctor who regenerated when he sacrificed his life to save his companion.

The Sixth Doctor’s personality was in many ways similar to his style of clothing – loud, extravagant, boisterous. That didn’t sit so well with many of the show’s fans since they considered this particular regeneration of the Doctor to be less than sympathetic.

Related: Doctor Who: All 32 Of The Doctor’s Canon Regenerations

To be fair to the Sixth Doctor’s actor, Colin Baker, it wasn’t his fault – it was simply the way the Doctor was written. The Sixth Doctor later gained more popularity when Baker recorded a series of audio stories from the world of Doctor Who.

The Seventh Doctor was complicated and full of contradictions. He seemingly represented himself as a funny figure and had a sense of humor, but at the same time, he was also brilliant and calculating – something he hid from his enemies, the villains he faced.

Sylvester McCoy portrayed the Seventh Doctor for three seasons and he was the last Doctor before the show had a long break.

The Eighth Doctor never got the chance to shine in his own seasons like the Doctors who came before him and after him did. He appeared in a television movie that was supposed to kickstart a new show.

Related: How Ace’s Return Could Create A Doctor Who Canon Issue

But the film failed to attract the attention needed and the show never came to be. Luckily, Paul McGann reprised his role in multiple audio plays and even played an important part in The Night of the Doctor.

The late John Hurt portrayed the War Doctor – a regeneration of the Doctor whose existence was previously hidden. It turned out that this Doctor refused to call himself the Doctor because he was the one who fought in the Time War – and also the one who stopped it.

Unfortunately, for the Doctor to stop the Time War, he had to commit unspeakable acts, which left him disillusioned and distant.

The Ninth Doctor, portrayed by Christopher Eccleston, started the renewed Doctor Who show. And even though he only played the character in the first season, he still left his mark. Eccleston’s Doctor was somewhat cynical and jaded, consequences of the recent Time War and the enormous loss he suffered.

Still, his friendship with Rose helped him to start to see the world in a different way. And the history repeated itself – like the Fifth Doctor, the Ninth Doctor also sacrificed his life to save his companion.

Tennant’s Doctor was never afraid to charge into danger, and he seemed to have thrived when facing his enemies.

Even though he wasn’t a Time Lord, he still deserves a spot on this list. The Meta-Crisis Doctor was a human version of the Tenth Doctor. He grew up from the Doctor’s severed hand and had both his and Donna’s genes.

Related: Doctor Who: Every Doctor’s First Story (& Who They Faced)

He was more violent and unpredictable than the Tenth Doctor. Instead of traveling in the TARDIS, the Meta-Crisis Doctor went to live with Rose Tyler on her world, and they became a couple.

The Eleventh Doctor was the youngest one, appearance-wise, and his looks reflected his personality. He was cheerful, geeky, often awkward when dealing with other people.

But Matt Smith’s Doctor also had a heart of gold and was very loyal to the few people he considered his friends. He would go to the ends of the Earth and more to protect Amy, Rory, and everyone he loved.

Interestingly enough, Peter Capaldi was the same age the same way as William Hartnell when he started playing the Doctor. The Twelfth Doctor was not only visibly older than his previous regeneration but also more conflicted about himself.

He worked hard to find out who he was as a person, and whether he was a good man at all. But he still found time for humor and built a strong friendship with Clara.

Valeyard’s position in the world of Doctor Who is complicated – and many fans of the show aren’t even aware of his existence. It’s also difficult to place him chronologically on the line – but he could stand somewhere between the Twelfth and Thirteenth Doctor. And who, exactly, is Valeyard?

Well, he’s supposed to embody Doctor’s darker side, his character traits that aren’t as optimistic. His face belongs to the actor Michael Jayston but some fans speculate that Ruth, played by Jo Martin, could also turn out to be Valeyard.

Jodie Whittaker created a record when she portrayed the first portrayal of the Doctor as a female character. She was in some aspects more similar to the Doctors from the classic series. She wasn’t as open about her past and her planet as the previous Doctors.

She kept her secrets closer to her, but that didn’t stop her from forming strong bonds with her companions whom she fiercely protected.

Sex Education’s Ncuti Gatwa has been cast as the Fourteenth Doctor. Showrunner Russell T. Davies announced that “The future is here and it’s Ncuti!” (via DoctorWho.tv). Gatwa’s portrayal of eccentric, quip-happy Eric in Sex Education shows that he has the energy, eccentricity, and range to put across a convincing and enjoyable performance as The Doctor.

In the footsteps of Jodie Whittaker, Ncuti Gatwa is another casting that redefines character tradition. Gatwa is the first Black actor to take up the mantle of the Doctor. His casting reaffirms that it’s not the color of the Doctor’s skin that makes him a legend of the small screen. Little has been revealed of Gatwa’s take on Doctor Who, but the Doctor’s Fourteenth incarnation is already shaping up to be a franchise-defining run.

Next: 10 Harry Potter Characters And Their Doctor Who Counterparts


Next
The Flash: 10 Best Characters That Appeared In Only One Episode

Kath Leroy is a writer at Screen Rant. She also publishes in a number of Czech magazines. She works as an actress and appeared in feature films, short films, as well as TV series. Kath has loved movies, TV, and literature ever since she was a child and her father first played Star Trek for her. Since she has a background in writing genre fiction and screenplays, Kath enjoys fantasy, sci-fi, and superhero films and shows above all – however, she likes to watch films of all genres.