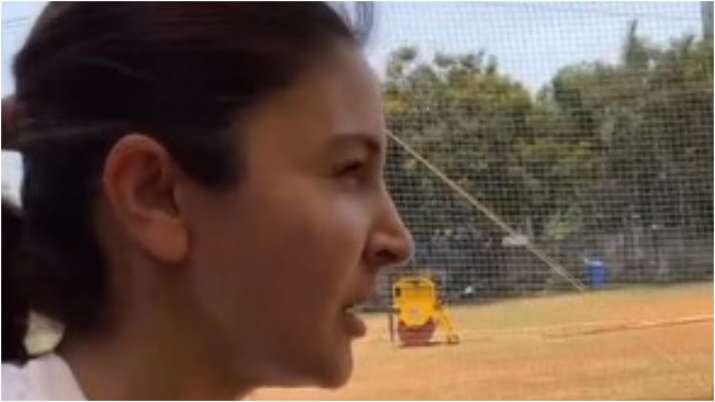 The anticipation around Anushka Sharma‘s Chakda Xpress has been on the rise ever since the movie was announced. It is the biopic of Indian pacer Jhulan Goswami who is a record-setting player in the ODI format. The Bollywood actress has been getting into shape to play an athlete on screen and is also spending time at the nets to learn the nitty gritty of cricket.

Read: Chakda Xpress: Anushka Sharma to shoot at 4 top cricket stadiums in the world for the sports drama

Anushka shared a boomerang video on her Instagram stories from her practice session as she spent some time in the nets. In the video, Anushka’s jersey is all muddy and she is sweating as she braves the scorching heat. Seems like she is getting to know a thing or two about a cricketer’s life. As she shared a glimpse from her practice session, she wrote, “Not at all hot.”

Read: ‘To justify the budget’: Why Anushka Sharma was cast in Jhulan Goswami biopic Chakda Xpress

Earlier, Anushka had shared a video where she shared her intense training schedule for the upcoming movie with the fans. In the video, Anushka is seen trying to bowl, and in another instance, she also showcased her catching abilities. Anushka posted the video with the caption that says, “That’s how the last few days have been!  #prep #ChakdaExpress #GoSweatGo (sic).”

The actress has also stepped away from the duties of a producer from her banner Clean Slate Films as she stressed focussing on her filming career.

Chakda Xpress will be released on Netflix in the coming time. It will mark the actress’ first appearance in a movie since 2018 release Zero, opposite Shah Rukh Khan and Katrina Kaif. Last year in January, Anushka also delivered her baby daughter Vamika. Since then she has been busy bringing up her child with husband Virat Kohli.